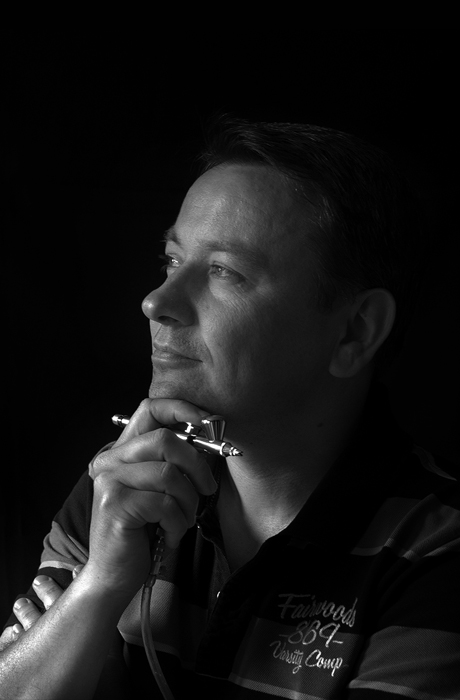 Thomas Olczyk was born in 1974 in Poland and lives in Germany since 1987. He has been painting and drawing since childhood; In school, art was one of his favorite subjects. His greatest interest, however, was the construction of aircraft models. To give them a special coat of paint, in the 1990s he used an airbrush for the first time. After seeing pictures painted with an airbrush, the artistic side awoke in him again – he was particularly interested in the topic of “photo realism”. In 2001, Thomas learned various techniques and the professional use of the airbrush in a well-known airbrush school.

Nowadays, he doesn’t do any more building and painting of airplane models, instead he paints pictures with the airbrush in his spare time. Human portraits and animals are among his favorite motifs today; He tries to make them as rich in details as possible on a variety of surfaces such as feathers, leaves or tree bark. I use the airbrushes of the Micron series because they’ve got good grip, the lever system is very smooth and allows precise and very detailed work. The combination of the Iwata Micron and the Createx Colors from the Illustration Colors series, which offers a wide range of colors and can be used on many surfaces, ensures a perfect result.